Inscrutable behind their blood-red masks, the Imperial Royal Guard will face down anyone that dares threaten the Emperor. While little is known about these enigmatic warriors, one thing is certain: their sole directive is to protect the leader of the Galactic Empire, with their lives if necessary.

The Imperial Royal Guards Unit Expansion contains everything you need to add a unit of Emperor Palpatine’s personal bodyguards to your army. The squad of four unpainted, easily assembled miniatures stands ready to protect the Emperor or do his bidding on any planet across the galaxy. The Royal Guard is also accompanied by five distinct upgrade cards that invite you to outfit them with even more tools for protecting the Emperor.

The Imperial Royal Guards Unit Expansion is releasing alongside the Emperor Palpatine Commander Expansion in the fourth quarter of 2018.

The Imperial Royal Guards give every Galactic Empire commander a new option for the special forces that will play a pivotal role in their armies. Every Star Wars: Legion army can include up to three special forces units and the Imperial Royal Guards will soon join the Scout Troopers in offering their unique skills in service of the Empire. But where the Scout Troopers range far and wide across the battlefield to quickly secure vital objectives and sabotage enemy operations, the Royal Guards serve a different role altogether. These warriors are ideally suited for hanging back and dominating small sections of the battlefield. In other words, The Royal Guards are at their best when they’re protecting key points, whether they be Emperor Palpatine, another Imperial commander, or a mission critical objective. 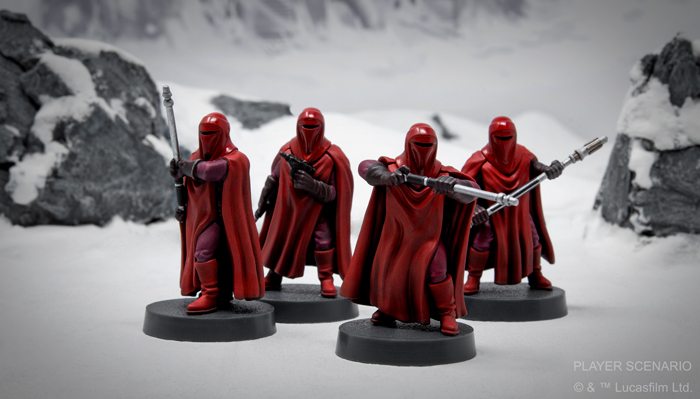 No matter what enemies they face, the Royal Guard is most effective up close, their deft reflexes and exceptional combat awareness making them exceptionally deadly at close range. Every member of the Royal Guard carries an EC-17 Hold-out Blaster that contributes two black dice to the attack pool per miniature, but is limited by a shorter range than other blasters. However powerful these blasters may be, they’re still no match for the Royal Guards’ skill with a Force Pike.

These melee weapons allow the Imperial Royal guard to quickly cut through opposing forces and ensure they are one of the few units that wants to engage the enemy one-on-one. Adding an Electrostaff Guard only reinforces the Royal Guard’s reputation as fierce melee combatants. Not only does this heavy weapon miniature contribute even more dice to a melee attack pool, it also enhances their defensive capabilities beyond rolling red defense dice. 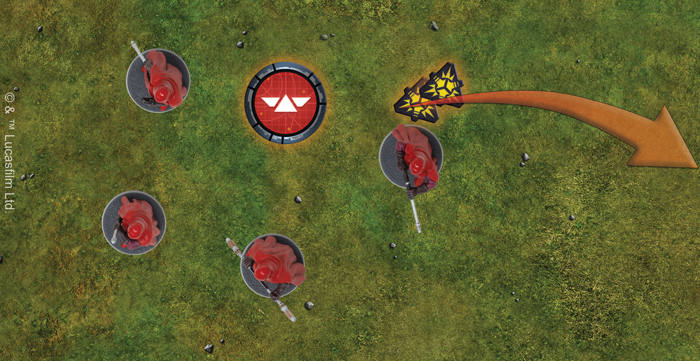 With their Disciplined 2 ability, the Royal Guards remove two suppression tokens when they are issued an order!

Their weapons and armor certainly set the Royal Guard apart from other units, but they truly distinguish themselves with their superior poise in battle. The Royal Guard represent the best that the Imperial military has to offer and are singular in their resolve to protect the Emperor at all costs. Their superior training makes the Royal Guard more disciplined than almost every other unit, granting them the ability to shake off up to two suppression tokens when they are issued an order.

We’ll take a closer look at everything contained in the Imperial Royal Guards Unit Expansion in a future preview! 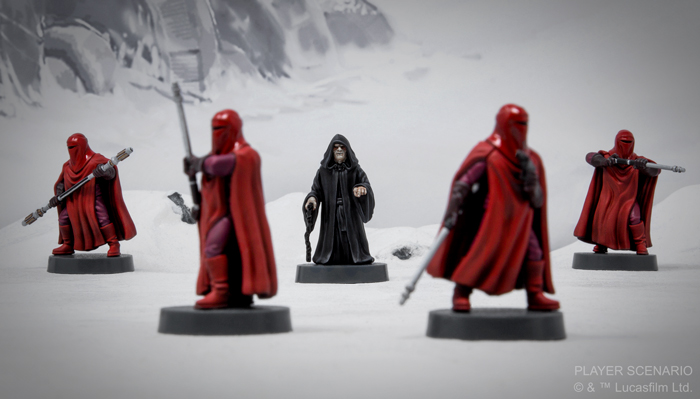 LOYAL TO THE LAST

The Imperial Royal Guard are prepared to defend the Empire until their last breath. When joined by an powerful Sith lord like Emperor Palpatine, they become a true force to be reckoned with.